Filed under: Uncategorized — dustydreamer @ 5:21 am

(I apologize in advance for the lack of images in the beginning, it seems that even with story progression off,  my main family file progressed and Hazel had her baby without me and baby had one day left before aging up. So I couldn’t proceed to make the hospital scene I wanted.)

Hazel screamed in pain in the desolate hospital room. Her hand was clutching Jenny’s, the other girl in a panic as she coaxed another deep breath,

The doctor, a friend of Dennis was delivering the baby and was repeating the same words.

Hazel just wanted them to shut up at that moment, they were infuriating, telling her the same thing over and over again, what was she doing?! Taking her sweet time!?

At one point she screamed shut up, but like all women in labor, her words were fleeting in the room. It took exactly 12 hours for the little new life to emerge into the clean, white room, it too screaming, crying and wondering why it was taken from its warm, safe cocoon.

Jenny had tears in her eyes as the nurse wrapped the child in a blanket and placed the little bundle into its mothers arms, the baby instantly became quiet, smelling the scent that it had known for nine months.

Hazel had been crying too much during the delivery to cry any more at the tiny sight.

The nurse smiled, “Congratulations Ms.Valenti…you’re the mother of a beautiful, healthy baby boy.”

“Look…Jenny…!” Hazel was in awe and couldn’t finish her sentence as she stared at the tiny person nestled in the nook of her arms. She never thought that you could love someone so much within a minute of meeting them, yet here was this child who held her heart, whole and new.

“Oh Hazel, he is beautiful…he is perfect!” Her friend replied, wiping her eyes with a tissue, “Just beautiful..” She whispered, kissing Hazels cheek and half hugging her.

“A boy,” she chuckled slightly and more to herself, “…and god help me, he looks like him.”

Colton Valenti was a beautiful child. He got along well with anyone who played with him and he was adored by Hazel, Jenny, and Dennis alike. Hazel never thought that she could be happy again, and yet here she was with her heart full and running over every time she cast her gaze over her son….her son. The words were yet so unfamiliar and new. She had no one to show her the ropes of parenting. During the time Colton was asleep, she would scour the internet and parenting books to help her with the growing baby.

Dennis and Jenny were constantly over; cooing over him and providing help whenever she needed it, which was not often. She did Jenny proud with picking herself up and getting out of the rut she was in.

Hazel knew it was hard to be a single parent, but she wanted to do it all, she did not want to miss a second of her life and her child’s. If she wasn’t busy reading and playing, snuggling to sleep and teaching to walk, she was sketching new ideas for paintings. Her private gallery was thriving and she promised buyers and watchers to have new paintings out every week, it was demanding and she had to pull back from it sometimes, but Colton always came first.

Hazel would often watch over him as he slept, his features were strong and cut deep…like his fathers. She didn’t need his picture out on her nightstand anymore, it was always staring right back at her. Sometimes he would smile and it would make her heart hurt. He had all the perfect fits of both her and Samir…it was hard to look at him sometimes.

Colton adapted to her life well and she adapted to having a child in hers. Hazel did not think she could be more happy. She knew her mother and father were watching over her and sending positive energy down into her life and she was thankful for it. 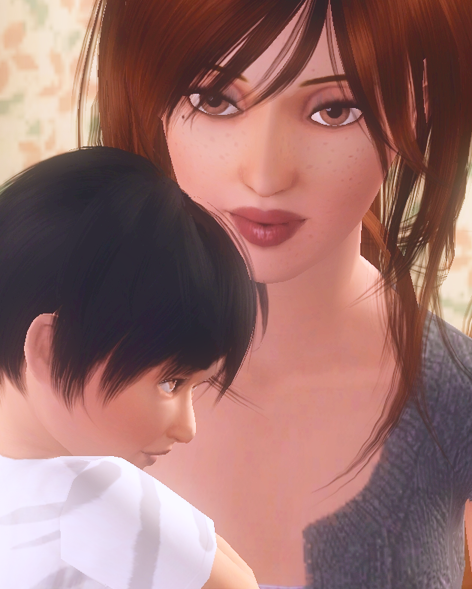